Jumpers on all 3 batteries on NEG. also. Same gauge as the Positive.
A

Almost finished. I used a both,off,1,2 switch I had laying around to manage my 2 Gr27 DC house batteries as Ludicrous suggested. The house loads are bussed with a Super block and I covered it up with some rubber gasket material, also laying around. I'm glad I don't throw stuff out!
I still need to mount and wire the 80 amp breaker and On, Off switch for the hauler to the right side of the pic.
Any reason why I can't mount both the switch and breaker for the hauler upside down? It would look cleaner once wired because of the entrance and exit points on both.
Thanks guys 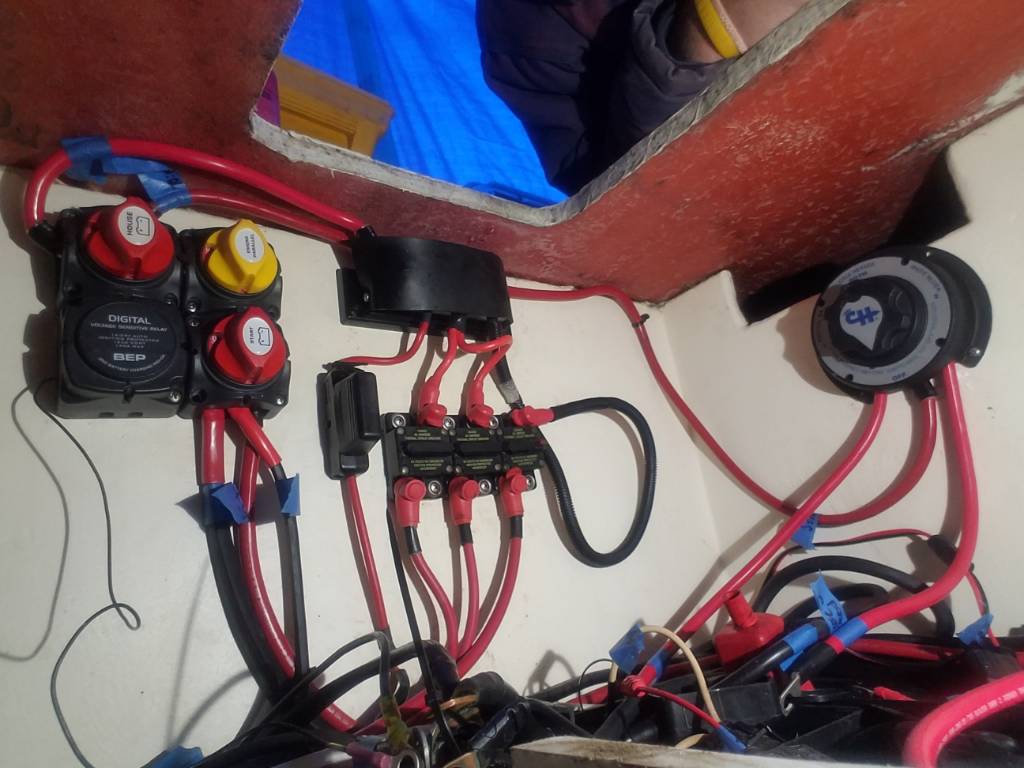 I'm sure it's fine. I mounted my BEP so it isn't right side up as it made the wire runs easier. The words are sideways but it works perfectly. One of these days I'll break down and get some pictures, but it's cold now in MA, and the boat is resting up for my next upgrades: I pre-ordered the new Durabrite Sport minis and I'm adding a second station, I just need to decide whether I'm putting a hauler on it for easy anchor retrieval and spot re-positioning.

So I'm assuming that the hot red wire from your old switch is just passing by the buss bar, and going direct to the BEP?

I would want them all to be the same gauge wire...

3 lugs to the BEP start. I’m assuming you decided to go with the kicker and main both wired to start? All good then. Heavy guage from BEP house to bus is obviously good. Smaller guage from 2nd Bat switch to BEP is ok, IMO, as long as the AMP capacity, distance traveled and voltage drop is covered with that guage wire. Same with respect to guage wire to hauler, house bus etc.. guage based on amp/distance etc... Looking good.
A

Thanks,
Shawnee, I decided to wire the 2 engines to the start based on a lot of hemming and hawing. I can always put it to the D house lug on the BEP if I want to change it.

The picture is curiously deceiving. The red cable looks smaller on that one run. I am using 2 gauge for everything including the hauler. The only 6 gauge are the individual house load runs

Ludicrous, yes that hot red is going over the buss to the BEP.
I started a thread about mounting my davit and hauler that you might find interesting in the Projects section. Tough to find real info on this.
F

I've been thinking about adding a BEP cluster for my twins for a while, nows the time. Ovetons has a 25% off coupon code- WINTERSTORM I paid $185 shipped, that's nearly half price.
B

Ludicrous40 said:
I've had great success with the BEP:

I have a 2003 2520XL with single outboard and have installed the BEP cluster switch. I primarily tuna fish, and spend most of the time on the hook running livewell pump, fish finder, radios, etc.. on house battery. I was always running out of power, but since switching to BEP I have had zero battery issues. When I installed the BEP I also installed an extra house battery based on my usage. Here is my configuration:

Using the standard battery switch I select either battery 1, or battery 2 such that only one of them is connected to the BEP house circuit.
By doing this I always have a full deep cycle battery available to me when offshore. FYI - I have never had the need to set them to both.

When running, the BEP always isolates the house from spikes during startup, and then charges the starting battery to full before switching the relay so that both the starting, and the selected house receive charging from the running motor. When on the hook, the relay switches as soon as the level drops, protecting my starting battery, and running on the one selected house battery. If this runs down, I can simply switch the original battery switch to the other battery.

No regrets here, the install was clean, works perfectly, and everything is in the bilge.
Click to expand...